Engineer and Architect Jobs in Bangladesh 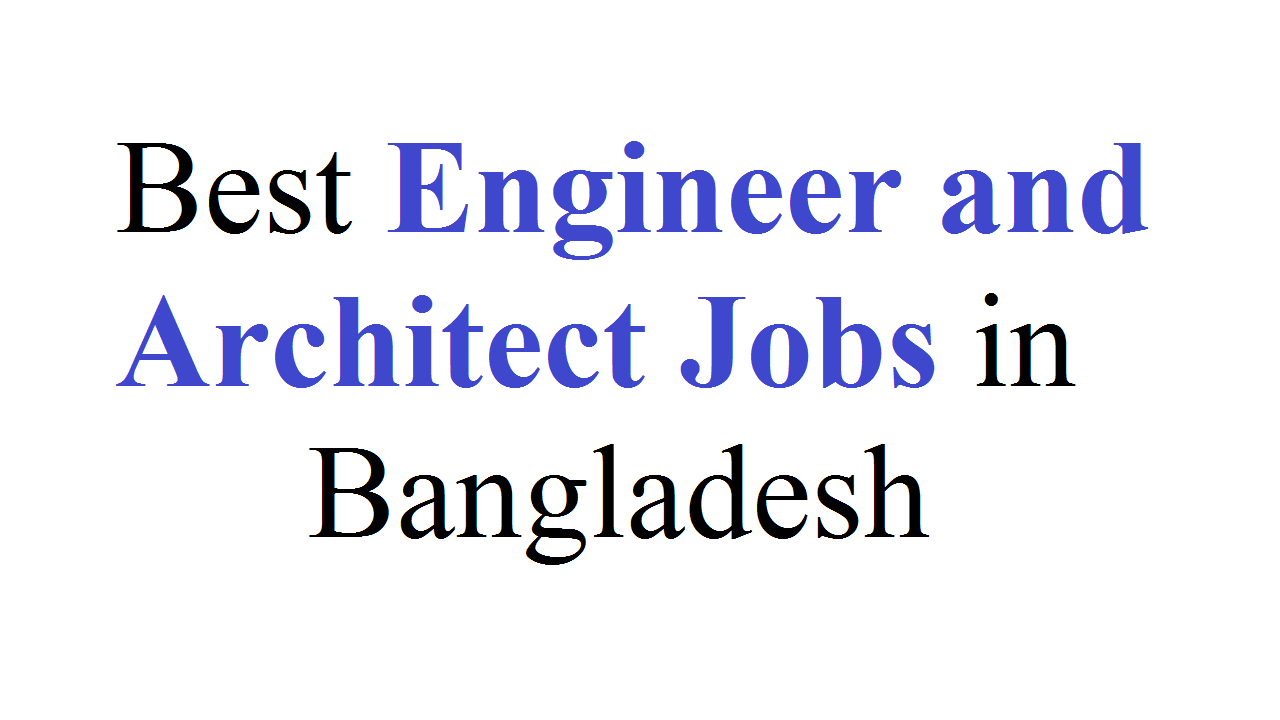 Finding the perfect job is often a long drawn out process of trial and error as the engineer and architect jobs in Bangladesh. While others use a passion-based approach to selecting a job, some aim for the highest paying jobs. There are advantages and disadvantages to all of the jobs.

But, we’re going to give an unbiased breakdown of the trends in the engineering sector and which jobs take advantage of these trends. These all the better if some of these jobs align with your passion or your need to secure a well-paying job.

Although no matter how many buildings get built, somehow humanity keeps finding a need for more of them. Besides, with a strong background in mathematics, the architects come in. as there are often jobs in related fields that architecture students find play more to their skillsets, the primary industry that those with architecture degrees enter into is that of architecture itself.

What are the Best Engineer and Architect Jobs in Bangladesh?

There are tons of different kinds of engineer and architecture jobs in the field. But, when you try to decide exactly which way to apply their expertise within the job market, it can often be difficult. As you know that the job of the architect relates to designing, constructing, maintaining and renovating buildings.

Also, they come with all interior and exterior systems that are structural, lighting and electrical, fire protection, acoustics and more. But, architects will need to graduate from one of the Universities to become an architect.

Also, students must complete a training period or internship, which typically takes three or more years to complete when they complete their graduation. Now, we’ll look at some of the best engineer and architect jobs in Bangladesh.

Software engineering is growing exponentially, which has the clear evidence like Google, Amazon, Facebook etc. As its incredibly complex nature of creating software, the job is one of the highest paying ones among engineer and architecture jobs in Bangladesh as well.

We all use are millions of lines of coding created by teams of software engineers, behind the sleek user interfaces. Also, it looks like the trend is not going to change very soon. There will be a massive demand for software engineers until artificial intelligence reaches the point where it can generate code based on a few user inputs.

For paying extremely high salaries, the job of a petroleum engineer is notorious. Although it’s not a very competitive market, this combined with the ever-increasing demand for engineers’ results. But, it has an abundance of engineers in the market, for example, a mechanical engineer.

Besides, this is not as same as petroleum engineers because the current workforce is set to retire within the next 10 years thus creating a void that will need to be filled. When people to fill them creating high demand, more positions will be available.

There is an ever-increasing demand for infrastructure as the world’s population increases. And here comes the roles of the civil engineers because they design and build everything. The need for new infrastructure steadily increases as the middle class grows in developing economies. Also, as requires constant maintenance in developed countries, their roles are getting increased. That’s why they’re always being in demand.

Airline companies are constantly looking for aircraft that travel further, use less fuel and carry more people as Millions of people are transported around the world in aircraft daily. It means that in order to innovate and develop new technologies, there is stiff competition in the aerospace industry.

Also, the age of private space companies is upon us because there are numerous companies which are on the cusp of exploding into space. So, there will the demand for aerospace engineers as the private space industry grows.

From lab-grown organs to Nanorobots that attack viruses in the body, medical treatment has begun to reach the realm of science fiction. As they try to improve the quality of life of individuals, biomedical engineers work closely with doctors to develop technologies. The demand for biomedical engineers will continue to grow when new technologies emerge and become cheaper.

Along with many others, the architect’s plan and design houses, factories, office buildings, and other structures. They typically meet with clients, give cost estimates, prepare drawings, and research local building codes to do this.

In order to help design cities and urban spaces in a way that’s sustainable and green, the urban planners use their architecture skills. Urban Planners are needed more and more to help design new city spaces or responsibly expand existing ones with their encroaching threat of global warming along with continuing population growth. This is one of the demanding ones among engineer and architect jobs in this time.

As they except that rather focuses on large-scale buildings and structures, industrial designers create (relatively) smaller items that can be mass-produced, Industrial Designers work similarly to general architects. And if you ask what the industrial designers create then they develop the concepts for manufactured products, such as cars, home appliances, and toys. As they like to make products that people use every day, they are combined with art, business, and engineering. When developing new product concepts, the industrial designers consider the function, aesthetics, production costs, and usability of products.

As you know the architects are combined with art, business, and engineering. Their jobs are spread to many fields and landscape architect is one of them. And if you ask what the industrial designers create then the landscape architects design parks and the outdoor spaces of campuses, recreational facilities, businesses, private homes, and other open areas. That’s why; this is one of the demanding ones among engineer and architect jobs in this time.

If you ask what the industrial designers create then the surveying and mapping technicians collect data and make maps of the Earth’s surface. As they take measurements of the land, they visit sites. But, using geographic data mapping technicians create maps. And both of them work as the assistant of the surveyors and cartographers and photogrammetrists. And it’s one of the demanding ones among engineer and architect jobs in this time.

Some Other Engineer and Architect Jobs in BD