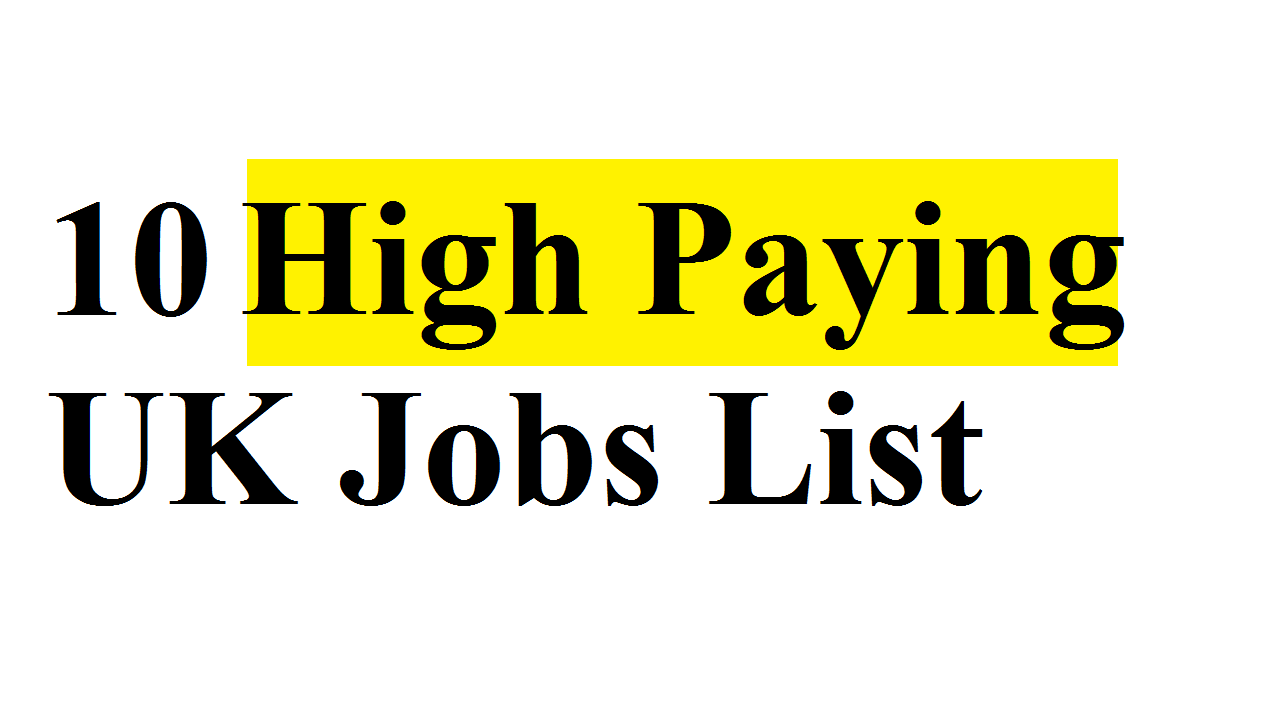 It looks like you’re searching for the high paying UK jobs for your own. There are plenty of industries that don’t need higher education or qualification. If you want to shine in one of these roles, you must be motivated, hard-working and willing to learn. There are many examples that left their school early in the life, but they’re billionaire later on. Among them, businessman Richard Branson is one guy who left school when he was 16 years old. He soon went on to start his first music business which became Virgin Records because this 66-year-old struggled with dyslexia and dropped out. Today Richard’s worth an estimated $5billion and he is continuing to grow his Virgin brand.

An Overview of the High Paying UK Jobs

According to the data of the Office for National Statistics (ONS), UK employees are on average better off this year on wage than at any time since the financial crisis. They earn in average £528 per week when they work full-time a day. That’s 1.8% up than the previous year. But, women are still struggling with an average weekly income of £100 or its less. This is because of the gender gap that just refuses to disappear in the job market. Besides, the private sector workers earn less than those who work in the public sector. The ONS surveyed a random sample of 1% of all the workers who carry out each occupation to obtain the data. It means that there are bonuses included. However, those who are doing appear in the payroll are excluded, including self-employed workers and celebrities.

What are the High Paying UK Jobs?

The below are the careers that offer the high paying jobs where you need your skills most. So, let’s know about the cool jobs that pay well and require less educational qualification. The best jobs in the UK are below:

Checking the gender of chickens can be surprisingly lucrative and you don’t need any experience or qualifications because it might sound like an odd career choice. What you need for this job are the good eyesight, patience, and nimble hands. This is because you have to look at up to 1,000 chicks per hour for a 12-hour shift during the job. It’s one of the high paying jobs in the UK. You can net a £40,000 wage each year if you have a good training and practice.

You’ll be away from home for months at a time but it pays well if you work in the mining construction. Anyone thinking of getting into mining has to be willing to work abroad because the work is mainly overseas. These may include the places like Africa, Australia, and America. However, you can get in with some related experience without having the degrees like civil engineering, geology or minerals surveying. Although you’ll get a starting salary of £25,000, after 10 years it’ll be £50,000. You may like- Best UK Based Automotive Business Ideas

Anyone over the age of 18 can apply to work on the wards if you don’t have any convictions and you can pass the background checks. You have to appear in the asses’ skills including reading, writing, math, aptitude and physical tests if you take a Prison Officer Selection Test (POST). The starting salary is £18,720 but senior levels can net £33,000 in England and Wales.

You can involve having communication skills and good leadership in order to coordinate and supervise projects being a Construction Manager. This role also means working on site in all weather because some of the work can be done from the office. However, construction Managers can earn upwards of £50,000 on the plus side.

What you need to nab you a sales job is you’ve got the charm and can sell ice to Eskimos. The starting salary is £12,000 but marketing and sales managers can be on as much as £100,000 a year when you’ve proven yourself in the interview. Moreover, the commission will give you some extra cash as well. Although it’s a high paying UK job, it’s tough to be a sales executive.

You’ll need three years’ training to obtain your air traffic control license from the National Air Traffic Services (NATS) otherwise you need not any degree. But, you need five GCSEs (grades A-C) behind you for the job. Depending on where you work and shift allowances, the starting salaries are £17,000 to £21,000, while experienced Controllers can reach up to £50,000. You may like- Profitable Business list in the Tourism Industry in the UK

Although offshore oil job is one of the high paying UK jobs, working on an oil rig can be tough. What you have to do in this job is such as rig operations, drilling operations, rig administration, and equipment maintenance. You have to stay in the sea for months with 12-hour shifts when you’re working as an offshore oil worker. However, there are transition courses for people with relevant experience and most people get a head-start through an apprenticeship scheme which requires four GCSEs. You can earn an average of £50,000 a year as an offshore oil worker.

It’s not all about being out on the streets fighting crime directly, and there’s a range of different roles you can do as a Police Officer. You can expect up to £50,000 if you move into Inspector territory as your career progresses.

If you want to be a firefighter, you must be physically fit and a quick-thinker is more important than any qualification. You’ll have to pass a series of tests like a physical drill in full uniform during the application process. Although the area managers are making more than £50,000, the starting salary is £21,583, with crew managers earning around £30,000.

The managers in this field can expect to receive upwards of £36,000 to get rid of the company’s hazardous by-products. But, it’d not sound appealing at first glance of the job. When you’ll have the level of skill, you’ll earn an incredibly lucrative compensation.

These are the high paying UK jobs for you with less educational qualification. Simply check out which one is suitable for you and get started. Besides, if you need any particular training for the job, you have to do it before of applying for the job. These highest paying jobs are just as the samples and you have to find out the best one for you. This is because you know better about your strong and week points.