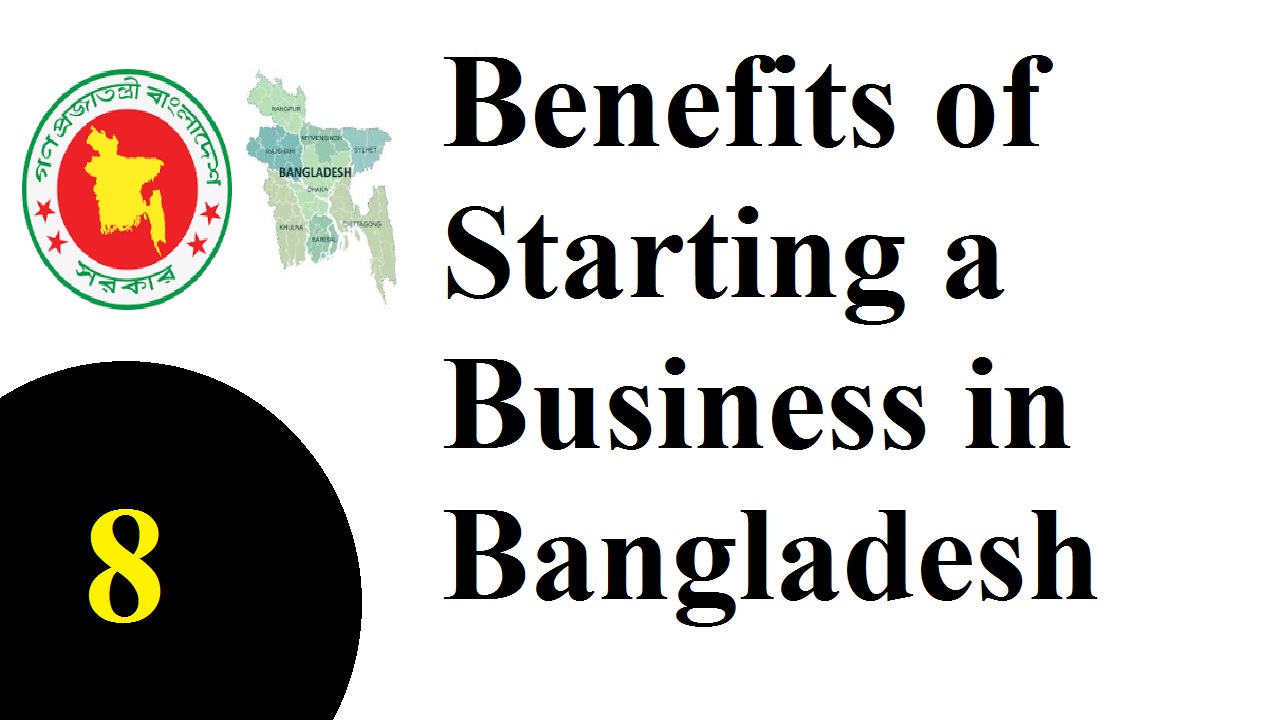 This is a second largest country who exports garments goods and a rising star in the industry of pharmaceuticals. The government has adopted an ‘Open Door Policy’ to attract foreign investment to Bangladesh to stimulate the rapid economic growth of the country. Besides, the location of the country is ideal for global trade with access to the international sea and air routes. The fiscal and non-fiscal incentives come with the ‘Open Door Policy’ for the investors.

Overview of the Benefits of Starting a Business in Bangladesh

There is the quota-free and duty-free access to some Bangladeshi products in the EU, USA, Japan, and Australia etc. Also, it’s obviously potential for a further increase in domestic consumption because it has a rapidly growing domestic market and, which is nearly 164 million.

Also, there are huge skilled workforces that are disciplined, easily trainable and low-cost workers suitable for any labor-intensive industry.

As the second language, English is spoken here widely despite the official language, Bengali. An abundant supply of natural gas, water, and fertile land are great endowed of the country. Here the potential investors can find a congenial investment climate, free from cumbersome procedures and this is the primary objective of an EPZ.

What are the Benefits of Starting a Business in Bangladesh?

As Bangladesh is continued to be an attractive destination for foreign companies, there are some benefits to starting a business here. The main benefit is the lower labor cost to produce goods. Now, let’s see other benefits to business in Bangladesh.

Bangladesh’s rapid economic development is its surging GDP is one of the most notable indicators. In 2017, the GDP of Bangladesh continued to increase at 7.3%. It’ll continue to grow in 2018 and 2019 as well, at 7% and 7.2%, respectively based on the current estimations by the Asian Development Bank.

The average GDP Growth for emerging and developing countries is 4.9% according to the IMF reports. As a result, the GDP growth of Bangladesh has been outstanding compared to other emerging markets.

Bangladesh is close to other major markets in the region as it’s located on the border of South and Southeast Asia such as China. Also, access to its neighboring countries of Bangladesh capital city Dhaka is much easy.

The capital is the largest economic center of Eastern South Asia and the commercial and financial hub of the country. Because of situated on the coast of Bay of Bengal, it offers good conditions for doing trading business within Asian and Middle Eastern markets.

The vast, young, and the skilled workforce is another attraction for the investors. The median age in Bangladesh is just 26.0 as a matter of fact, in 2018. Also, It’s is potential for technical education. Here every year more than 15,000 Bangladeshi fresh graduates get into top IT firms such as IBM, Microsoft, and Google. Moreover,

Bangladesh is listed as an ideal destination for outsourcing by the European Commission. Promoting the progress of the ICT sector to create Digital Bangladesh with the Tech Parks situated in Dhaka and Jessore.

According to June 2018, the population of Bangladesh is 166,340,956 according to the United Nations. As a result, it’s the 5th most populous country in Asia and the 8th in the whole world. Moreover, it’ll reach 265 million by 2050 by the UN estimation. Besides, the middle class of Bangladesh is also expected to grow to 34 million, triple the number of today’s middle-class of 12 million by 2025.

This is the lowest and it’s only $63 (BDT 5300), the average monthly wage for garment workers in Bangladesh. But, it’s about $347 a month in China for example. The main reason why many companies are moving their manufacturing to other destinations are the increasing costs in developed countries such as China. This is most considering one among the benefits of starting a business in Bangladesh.

While allowing foreign investment in most sectors and providing favorable conditions for doing business Bangladesh has shown a very welcoming attitude towards foreign investors. Foreign investors are getting various incentives; some of them are as below:

Not only the member of the World Trade Organization but Bangladesh has signed memberships and agreements include:

Moreover, there are main trading partners of Bangladesh has been the European Union. It offers duty-free exports for the EU-Bangladesh Cooperation Agreement.

There are over 80 million Bangladeshis using the Internet in 2018 As confirmed by the latest reports by the Bangladesh Telecommunication Regulatory Commission (BTRC). It means that more than 49% of the total population of Bangladesh is using the internet.

This made Bangladeshis are now gaining more access to the Internet. It has brought the excellent opportunities for online businesses, such as banking services and e-commerce, to thrive in Bangladesh.