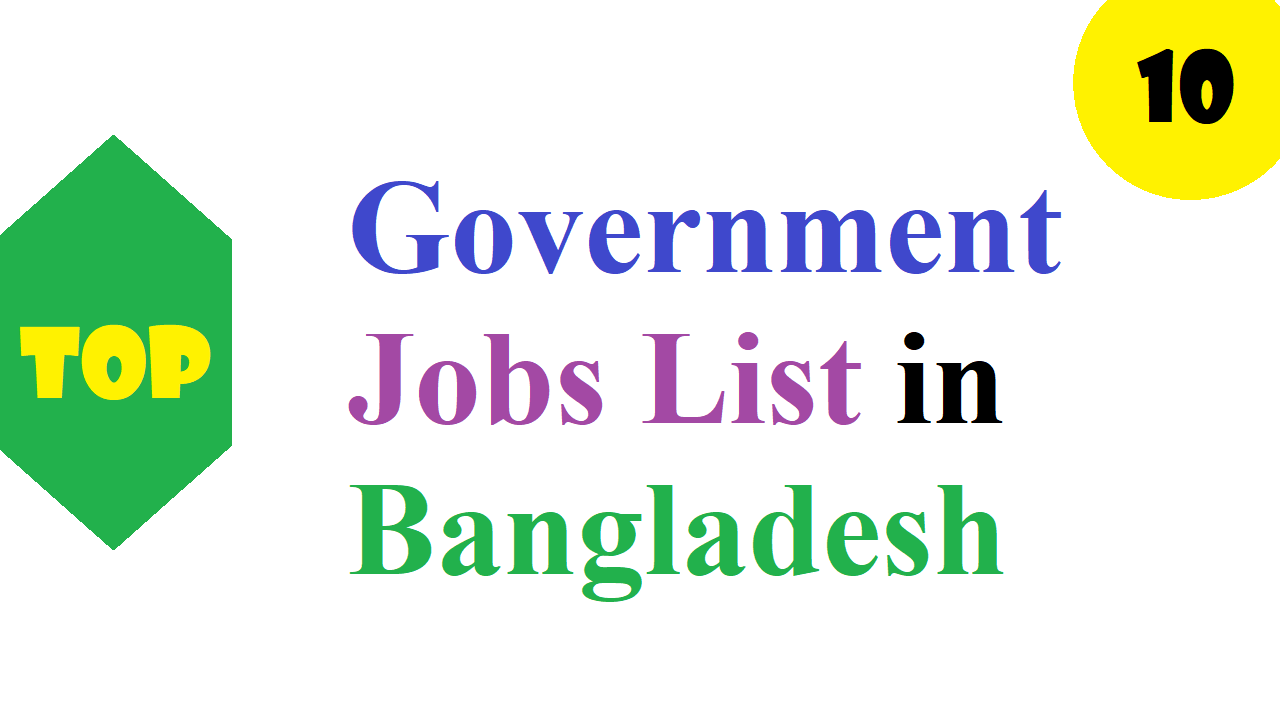 Moreover, they have a handsome amount of money when they come to the retirement. As a result, students like to get the jobs so that they need not consider any other options of income. As the unemployment numbers skyrocketing, there are always thousands of applicants lined up for a single vacancy and when this vacancy is for a government institution.

As many government jobs pay well and in the most cases better than equivalent private jobs, the demands of these jobs are always high.

Not only stability in their career but the government jobs provide employees with job security as well. Well, let’s know the following top 10 government jobs in Bangladesh so that you can come along with many benefits.

As this is the aspirant dream of the students to get through the Bangladesh Civil Services, the scores of students turn up every year to qualify for the BCS examinations.

Under the Civil Services and involves administrative services and policy implementation as their main job responsibility to the Bangladesh Public Service Commission and it’s perhaps the most sought-after position. Also, they get the higher salaries for their jobs. Moreover, there are jobs for the BCS cadres’ like Magistrate, TEO, ATEO, AC (Land) etc.

Defense Services is your answer if you want to significantly contribute to your nation and at the same time enjoy a well-paying job complete with national pride. The jobs come with not only a good salary but official residences and medical facilities as well.

In order to enter into defense services at an early stage in your career, there are some specific exams. These jobs are also respectable ones among other public jobs in Bangladesh. When you’re in the defense service you can to serve his country in various positions in the-

As public banks offering at par services with private banks, the banking sector has taken major strides in the last decade. In Bangladesh, bank jobs are one of the most sought-after jobs.

The Institute of Banking Personnel Selection recruits thousands of graduates every year with a good salary package and minimum work pressure.

And it’s one of the most sought-after jobs for successful graduates in the country because the basic education qualification includes being a graduate.  Moreover, there is one of the most desirable and offers a great salary with extra perks for the position of Bank Probationary Officer.

One of the best miracle makers are the doctors. As they save lives, they are often necessary to work under immense pressure and stretch beyond their working hours. The main purpose of a government doctor includes reaching out to the poor and making a difference given the population of Bangladesh.

And, government doctors are also in proportion to the job demand according to the service benefits. The standing examples of government hospitals are seen several thousand patients on a daily basis.

Scientists are also in the good positions with their government jobs in Bangladesh. And they work for different government organizations like Bangladesh Nuclear & Research Center etc. They enjoy not only extremely well-paid packages but perks that include accommodation in individual houses, medical insurance etc.

You can become a government college/ university lecturer is the best choice if you’re into a teaching job. Some of the perks of this job are including a very good paycheck and a huge number of holidays. When you’re in this job, you’ll be able to inspire the young generation of the nation.

Although the job pressure is minimal, the fun of spending time with young minds is immense. As it’s usually funded by the government, they get the courage to take up research.

One of the best government jobs in Bangladesh is police jobs. Although it has a criticism of the department, they get a good amount for their services. Their primary duty is to make sure that people under their jurisdiction are safe under the government direction.

They are one of the real-time heroes of Bangladesh in basic along with other defense forces. As they get paid well and the perks are also equivalent to other high-grades’ officer, they maintain law and order in the country and are highly respected.

#8.Officers in the Railway

The jobs are good for you if you’re with the engineering degrees. That’s why you can become a railway engineer is the best career option when you’re an engineer. They not only enjoy luxurious houses but get various other benefits provided by the government of Bangladesh.

Also, the Railway recruits non-technical graduates if you’re not an engineer. Moreover, the job pressure and work demand are also manageable while you’re in this job. The staff gets to explore whatever talent they have as Railways is such a large organization.

Bangladesh Power Development Board (BPDB) is also known as PDB that’s for providing power to major parts of the country and enjoys great repute. PDB is on the road to becoming Bangladesh’s largest and most efficient power distribution corporation in India, and a career with such a corporation is nothing short of a dream come true according to the reports. And they not only enjoy a manageable work pressure but handsome pay and great perk with other benefits.

This is one of the most beneficial jobs in the country in the insurance sector. Also, there are good salaries for the jobs. Just a university degree is the basic eligibility criteria for this job. When you’re in this job, you have to do many types of jobs.