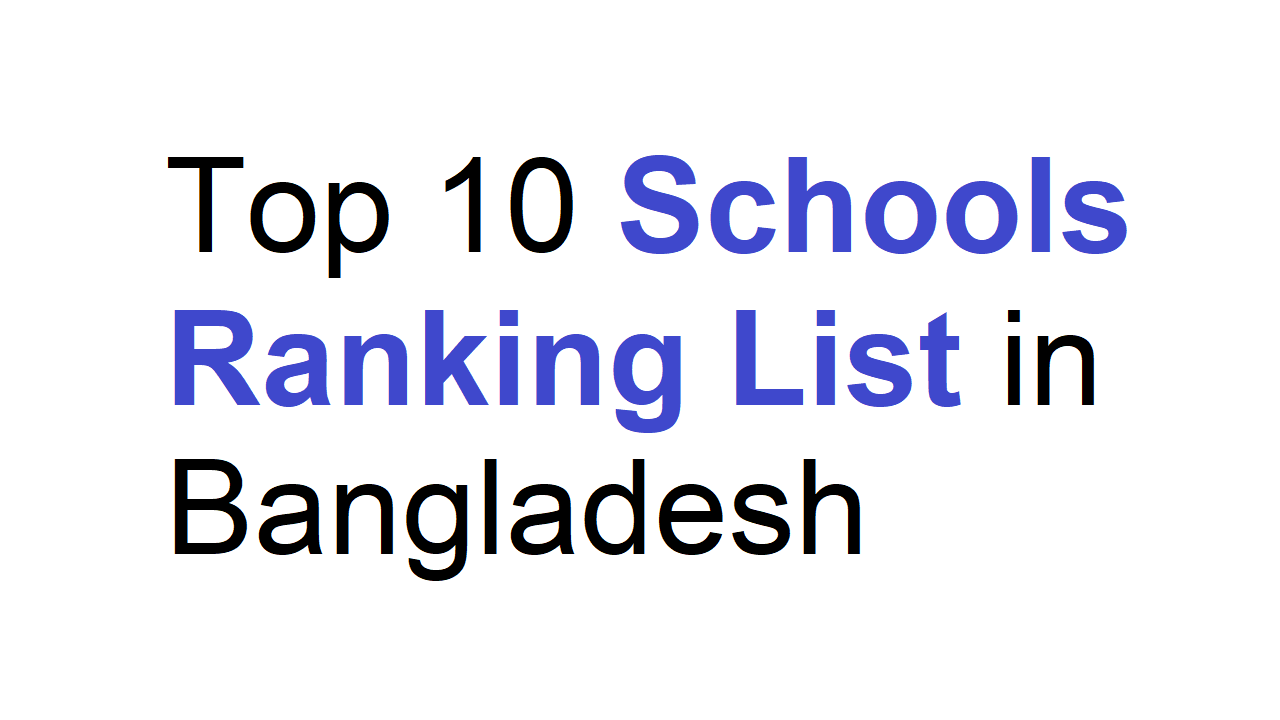 If you’re looking for the top 10 schools in Bangladesh then you’re going to serve them from our well-research. Although education is considered as a backbone for any nation, many of us don’t know what the reasons are to say so. In this case, education is the process of facilitating learning or the process of developing the skill, values, knowledge etc.

The first step school plays an important role as a media is to build better human beings and in this whole process. This is because a school is a place where children come to know about the mental, social, and physical aspects. The quality of education is being best and to maintain this quality only a good school can play a vital role since education is the foundation of any society. This is the other reason why education is very important.

What is the Top 10 Schools Ranking List in Bangladesh?

Despite increasing rate of education, all of them are not getting a quality of education. It doesn’t mean only the poor children of Bangladesh. But, it’s talking about the children whose parents have the ability to give their child a better education.

It was 1952, the year of the language movement; Begum Viqarunnisa Noon has established the Viqarunnisa Noon School. But, if you’re a boy then you can’t get admission in this school because this is a girls’ school. In its 4 campuses, there are about 25000 students and 650 teachers.

As the main campus is on Bailey road, its other 3 campus is in Dhanmondi, Azimpur, and Bashundhara. Apart from the two shifts of morning and day, the school has two versions like English and Bangla along with three departments, including Science, Commerce, and Humanities. Every year the school secures the top place in the SSC exam. These all made it one of the best in the top 10 school list in Bangladesh.

Another best school in the list of top 10 schools is the Government Laboratory School, which is shortly known as Govt. Lab. The Director of the D.P.I, Muhammad Shamsul Haque was the founder of the school and it was 3 September 1961 when the school was founded. According to the logo of the school, the motto of this school is, “Alo aro alo (light, more light).” More than 4625 students are studying in this school in the current date.

This is the Ideal school and college, which is also known as Motijheel Ideal School. With the help of the people of AGB Colony, it was established on 15 March 1965. And this is not only a private school but college as well. As this institution has 2 branches in Dhaka, they are in Banasree and Mugdha.

However, its main campus is in Motijheel, which is one of the best in this top 10 school list. Apart from two versions English and Bangla, there are about 25000 students, 300 staff, and 750 teaching staff.

It’s situated in Dhaka Pilkhana near the gate number 5 and it has no other branch. Although there is the secondary level offers science and commerce, at the Higher secondary level, there is also humanities. Being into two shifts Morning and Day, it’s also offering English version and this is available up to secondary level.

The short form of Dhaka Residential Model College is DRMC, which was established in 1960 beside the Mirpur Road, Mohammadpur. Along with a 24 part-time faculties, there about 4200 students, 168 staff, 155 full-time faculties. As DRMC is one of the toughest schools in Dhaka, students get chance here based on an entrance examination, medical examination, and an interview result.

RAJUK Uttara Model College is also known as RUMC, which was established in 1994. The location of the school is in Sector#6, Uttara, Dhaka. Although there are about 4900 students, 175 teachers, and 99 staffs, it has only the students of 6th, 9th and 11th standard got chance to admit here.

Holy Cross Girls High school & College was established in 1951, which is a Catholic school was founded by the sisters for girls. Apart from being about 1800 students and 57 teachers, the school won twice the price of ‘Best National School”. Its rules and regulation along with extracurricular activities are well-known in the school.

Saint Gregory’s School is the official name of the St Gregory’s High School, which was established in 1882. Because the founder of this school was Father Gregory De Groote, it has named Gregory. Although until 1912 there was both girls and boys student, after 1912 the girls’ section was separated from the boys’ section. And despite starting with English medium, it starts Bangla medium after 1947.

Saint Joseph Higher Secondary School was established on 19 March 1954, which is a Catholic higher secondary school in Dhaka. As there are over 2500 students are studying here, this school is another competitive school.

Dhanmondi Government Boys High School is a public boys’ school, which was established on 21 March 1965. Having only one media and that’s Bangla, the school has more than 2200 students and 75 teachers.