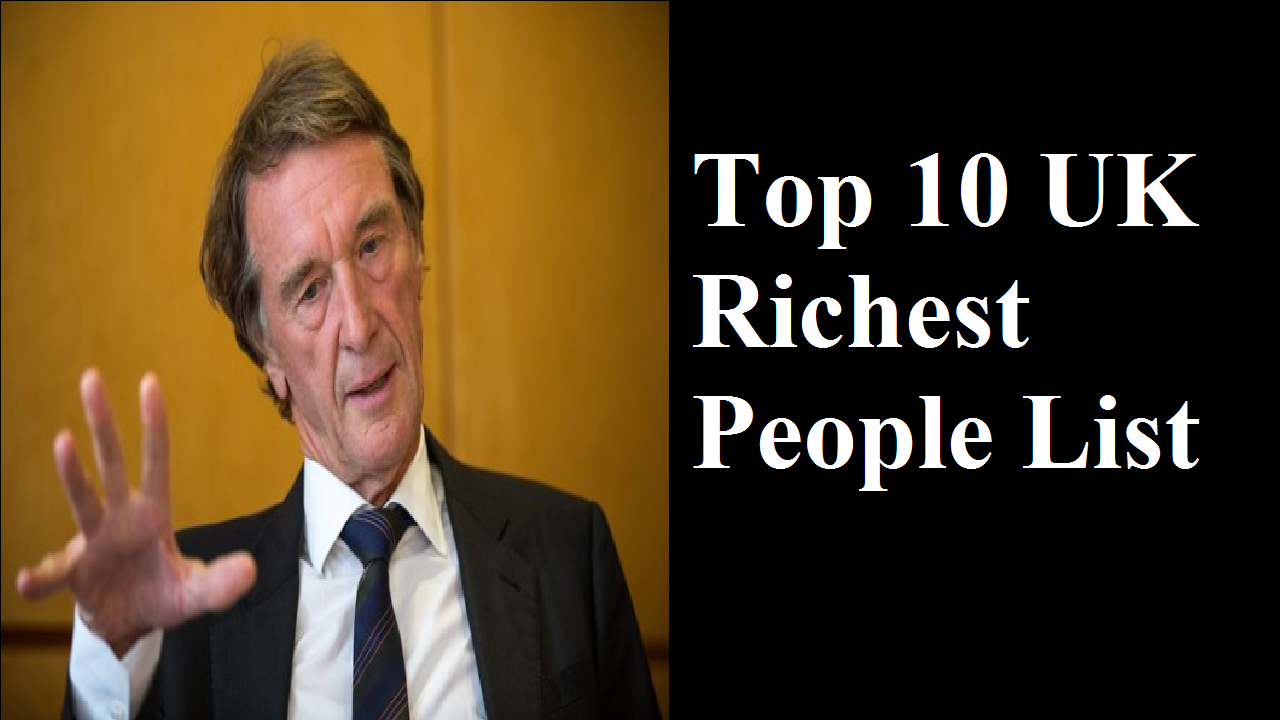 According to the Sunday Times, there are the 19 UK richest people on the list. But, we’re going to discuss of the top 10 richest people of them. There are a significant number of reasons for this year’s rankings.

This is because it contains a record number of British women are here. Moreover, it’s topped by a British-born industrialist for the first time ever as the top richest person in the UK. Before we proceed to the list of the UK richest people, we’ll get the overview first.

An Overview of the Top 10 UK Richest People

The UK richest person with a whopping £21.05billion is the business magnate Jim Ratcliffe, according to the Sunday Times Rich List of this year, 2018. This businessman of 65-year-old is an MBA of London Business School. As it’s said already, he is the first ever UK-born person to get this rare honor as the richest people in the UK.

The second position is secured by the Hinduja brothers, Sri and Gopi. They own the wealth of £20.64billion, which was £15billion in the last year at the 18th place.

Sir Len Blavatnik came in third place with £15.26billion at the third position. Because of this, a British-American industrialist turned a media magnate.

Who are the Top 10 UK Richest People?

Besides, with Charlene de Carvalho-Heineken, there are 141 women on the rich list. This is because Britain is changing and the days are gone when there was domination on the Sunday Times Rich list of the old money and a small band of industries.

Here is the lead of the self-made entrepreneurs replacing the aristocrats and inherited wealth. Now, let’s know about the top richest people in the UK.

The industry of wealth Sources: chemicals

Making Ratcliffe the first ever British-born industrialist to top the list, his net worth has increased a whopping £15.3 billion since last year. In this richest history, he is the archetypal rags-to-riches. On the outskirts of Manchester, he grew up.

According to the Sunday Times, he used to count the chimneys he could see from his parents’ council house in the early age. This makes him inspired to start a career in the industry, basically the chemical sector.

Now, he is running one of the world’s biggest chemical companies Ineos as a founder. Including a huge estate in remote northeast Iceland that he bought in December, he owns yachts and an impressive property portfolio.

Besides, he said he was staggered by the growth of his company while speaking to The Sunday Times in an interview. He said that it needed doing 25 years and he is 65 now. They’ve been successful every year with the exception of 2008. This is because of these all Jim Ratcliffe is at this top list.

The Industry of wealth Sources: industry and finance

About Sri and Gopi Hinduja

They racked up their sizeable wealth through property development and car manufacturing and were top of last year’s Sunday Times rich list.  And more recently, the Hinduja brothers donate £300 million for the old War Office in London’s Whitehall. The wedding for one of the brother’s sons cost £15 million that indicates their richness. Because of these all Sri and Gopi Hinduja are at this top list.

The industry of wealth Sources: investment, music, and media

After the fall of Soviet communism, Blavatnik became a billionaire. While he was controlling oil producer TNK, partner of BP, he built his wealth. Moreover, Blavatnik’s share was worth more than £4 billion when it was sold to Russia’s Rosneft in 2013. In the world’s largest producer of polypropylene, LyondellBasell has his investment along with aluminum producers and chemical companies. He bought Warner Music and then The Beatles’ label, Parlophone, in 2011. This is because Sir Len Blavatnik is at this top list.

Read more- 10 Most Powerful people in the UK

The industry of wealth Sources: property and internet

About David and Simon Reuben

after initially investing in the Russian metals market, the Mumbai-born brothers and British citizens make most of their money through lucrative property deals. When the John Lewis makes Partnership HQ in Victoria and shops in Sloane Street were solid when they return from their lucrative properties like Millbank Tower. This is because they made a huge property and come in the list of the UK Richest People.

The industry of wealth Source: steel

Following a number of challenging years, the steel tycoon’s fortune is up £1.483 billion in 2017. Moreover, his fortune decreased as oil and commodities prices tanked over 12 months, in 2015. Also, his company lost £5.5 billion and stopped paying a dividend to investors in previous years. Because of these, he stepped down from the top list.

The industry of wealth Sources: inheritance, brewing, and banking

As the only child of Freddy Heineken, who died in 2002, Charlene de Carvalho-Heineken, pictured here, inherited Dutch brewer Heineken, worth £36.7 billion. However, she lives with her husband in London and Switzerland. This is because she became one of the richest people in UK.

The industry of wealth Sources: inheritance and investment

About Kirsten and Jorn Rausing Swedish brother and sister

Living in Britain, this Swedish brother and sister are the leading shareholders of Swiss Tetra Laval packaging group. brother Hans initially inherited Tetra Pak and their father was Gad Rausing. Moreover, in the online retailer Ocado, Jorn initially had a £26.5 million venture. This is because Kirsten and Jorn Rausing are at this top list.

The industry of wealth Sources: mining and investment

Because of the Russian oligarch made his money through steel and iron-ore mines and companies, Alisher Usmanov is in this list’s top. But, after President Vladimir Putin installed more favorable tax laws, he has started moving the ownership of some businesses back to Russia. Because of this Alisher Usmanov reaches in this top list.

The industry of wealth Sources: retailing

Deriving most of his fortune from the huge George Weston operation in Canada, but Galen was born in Buckinghamshire. This is the group that owns a number of huge food stores including Weston Foods, Loblaw supermarket chain, etc. This is because of Guy, George and Galen Jr. Weston and family are at this top list.

10. The Duke of Westminster and the Grosvenor family

The industry of wealth Sources: property

About The Duke of Westminster and the Grosvenor family